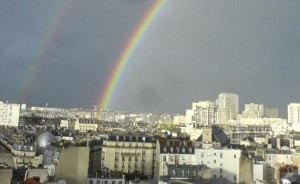 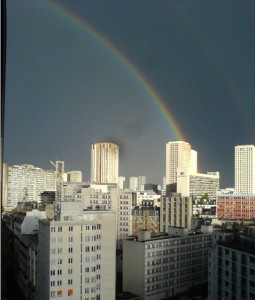 Two views of Place d’Italie in Paris. The inner city is to the left hand side: zinc roofs, of many shapes, create a sense of completeness. The recently built headquarters of the Seydoux-Pathé foundation (arch.: R. Piano) are covered with an ambitious curved roof. On the right hand image, the outer city, developed after the sixties, is a park of flat roofs. Image credit: Roberto Casati, May 2015.

Flat roofs have existed since very early in the history of building. They are wonderful living spaces (as terraces), and can be used to collect water. But since rationalist, post WW2 architecture they have become commonplace in cities: commercial buildings, housing projects, corporate buildings, almost all have flat roofs. Paradoxically, for an extremely functionalist architecture, there is almost no function for flat roofs. Flat roofs are just easy to build and spare you the effort of thinking of, let alone constructing, more complex structures. As of late, some flat roofs have been colonized by roof gardens and solar power plants, and we can just hope that the trend continues. Still, there is something about the shape of a roof that should attract more design attention. Here is a philosophical speculation. Flat roofs make the communication between earth and sky impossible. Why? Flat roofs create the appearance of truncated buildings. There is no visible sign that the building should stop at the roof. Pyramids visually entail that at some point the growth of the building will stop, where the oblique faces meet. Vertical walls require a sign that the building is finished, and that we enter the domain of the sky. Curved roofs, cupolas, spikes, spires, are benevolent messages suggesting that the ambition to grow comes to an end.

Our simple suggestion: decorate existing flat roofs of cities and suburbs, by adding structures on top of them. In the 19th century Baron Haussmann built a roof city on the top of Paris, turning pitched roofs into living spaces. A much awaited 21st century Haussmann will make smoother transitions between Earth and sky.

Written By
Roberto Casati
More from Roberto Casati
Some of the warnings that accompany viruses’ descriptions and critical updates of...
Read More